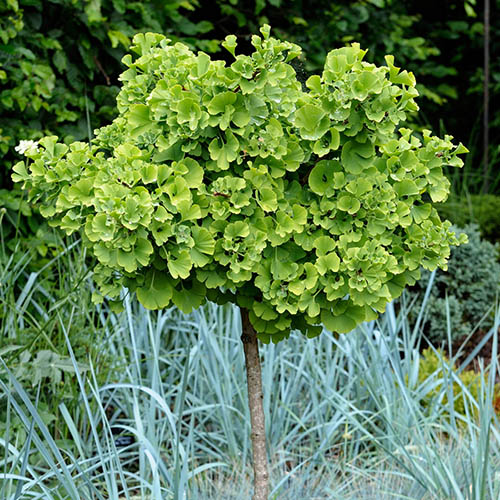 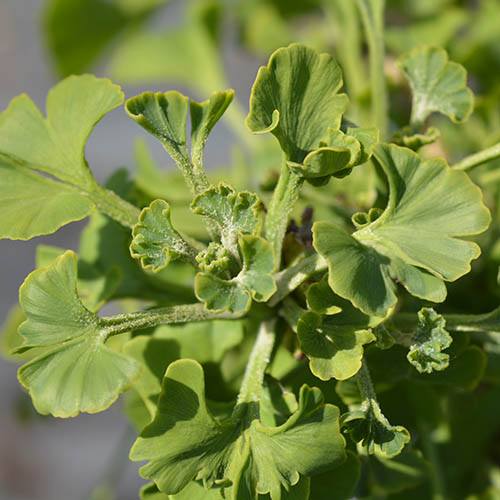 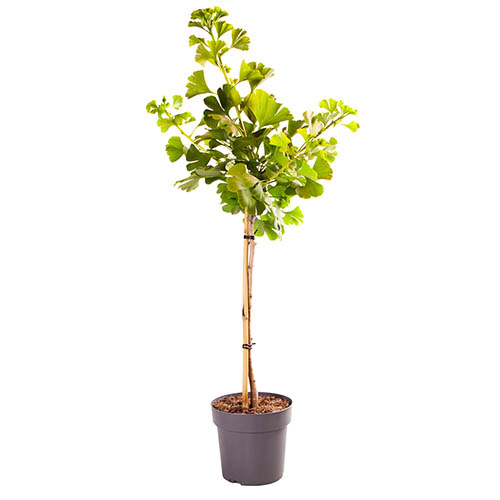 The only surviving member of an ancient species of tree, Ginkgo biloba is often referred to as a living fossil with some preserved specimens dating back 270 million years!

Thought to have been extinct, it was rediscovered in China in the late 17th Century and soon distributed around the world in both urban and rural gardens and streets.

Also known as the Maidenhair Tree, for gardeners, Ginkgo is possibly one of the most attractive and useful trees that you can plant in your garden with its attractive roughly conical shape and fan-shaped leaves which turn yellow in autumn.

The distinctive, deciduous leaves of Ginkgo biloba give a hint at its ancient heritage being very basic in structure. The curious frilled lobes resemble a duck's foot and take on buttery tones in the autumn before fallen suddenly - often within a few days.

A tree that enjoys full sunshine and most soil types, Ginkgo is easy to grow and can even be grown in a pot on your patio or balcony. They adapt well to a restricted root system and are extremely resistant to pruning, so our growers have been able to create this beautiful standard plant with its ball of foliage - testament to their resilience. Ginkgo 'Mariken' is more of a recent introduction to the family and is one of the best Ginkgoes for a large container having a very slow rate of growth.

Gingkoes are dioecious in that there are both male and female plants. As well as its stunning autumn colour, older female Ginkgo trees may produce large, sunshine-coloured fruits in warm summers. These have a distinctive aroma and, along with the leaves, are often used in traditional Chinese medicine - indeed if you search the internet, you'll see endless reference to supplements and anecdotal health benefits ranging from memory cures to a longer life.

While the health claims may remain unproven, something that we do know is that Ginkgo absorbs pollutants, with a number of studies proving that they are great at absorbing Carbon and other nasties from the air, making them a favourite of town planners for fighting urban pollution with the potential to improve local air quality.

Supplied as an established standard plant in a 3L pot, approx. 80cm tall, ready for planting out or potting on.

Item 510939 supplied as:
Supplied as an established standard approx 90cm tall including 3L pot, ready for planting out or potting on.  H150cm x 250cm if unpruned after 10 years.

Pot-grown trees can be planted at any time of the year as long as the soil is not waterlogged or frozen. If in doubt, err towards spring but remember to keep pots well-watered so that the soil does not dry out.