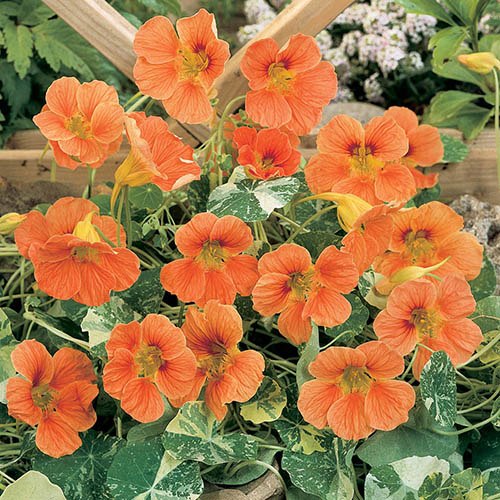 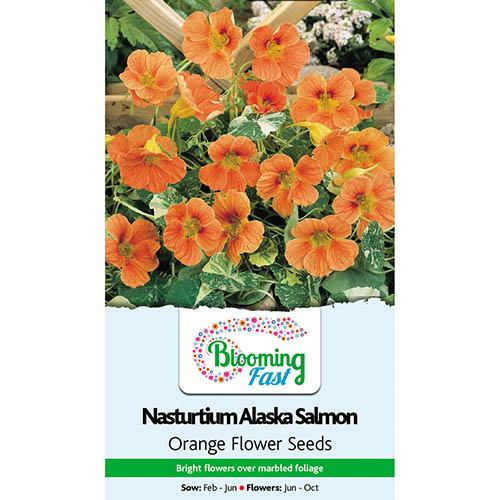 Beautiful five-petalled, softly coloured blooms and intricately marbled leaves are what make this nasturtium a superb choice to complement any garden scheme. The pretty salmon-orange flowers have darker veins flushing from their centres and stand above foliage that forms attractive, globe-shaped mounds.

A winner of the RHS Award of Garden Merit, ‘Alaska Salmon Orange’ is noted for its reliability and good performance. This hardy annual is easy to grow and versatile, with a long flowering season from early June until the first frosts in October. They look fabulous when trained up a trellis or fence, tumbling out of window boxes and containers, or cascading over the sides of hanging baskets. Plant them as groundcover in a mixed border or rock garden, where they will add pleasing interest amid other flowers and foliage. They also look great as a cut flower in a natural arrangement.

A worthy addition to a kitchen garden, nasturtiums are loved by bees and butterflies, so are good for pollination. They will attract hover flies, which prey on aphids, so make a great companion for brassicas, pumpkins, radish, tomato and potatoes – even roses – to help control pests. When they die back they will replenish the soil, adding nutrients and minerals to help other plants thrive.

Being native to South and Central America, which were known as the Indies, the flowers were once commonly called ‘Indian cresses’. Indeed, the leaves and flowers are edible, with a pleasant, slightly peppery flavour reminiscent of watercress. Mix them into your salads and garnishes for a pop of extra colour and flavour, or add last minute to a stir-fry. They are rich in vitamin C, too.

Supplied as a packet of 25 (approx.) seeds ready to sow indoors in pots, from February to March, or outdoors from April to June directly where they are to grow. Nasturtiums will flower most prolifically in a sunny position in free-draining soil. They are drought tolerant but appreciate an occasional watering in warm weather. Regular dead-heading will encourage continuous flowering.

Supplied as a packet of 25 seeds (approx.) ready for sowing indoors or outdoors.

Flowers in the same year as sowing, from early June to October.
Grows to 30cm (12in) height and spread.
Flowers and leaves are edible (although should not be eaten by pregnant women or those with kidney disease).
Performance subject to growing conditions.
Origin UK.