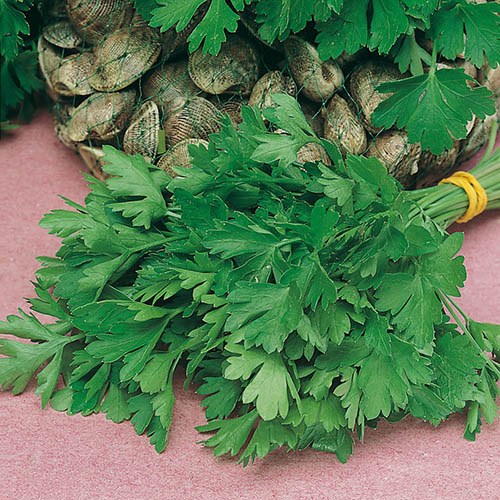 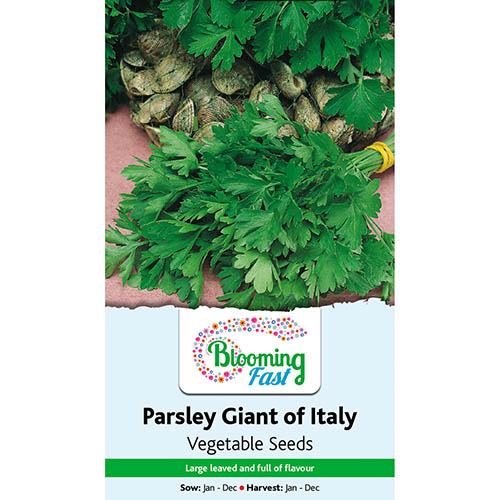 Herbs are one of the easiest plants to grow – you don’t even need a garden! Just a few in pots on the patio or windowsill, or sown directly into your garden beds, will allow you to add that little extra to a dish. Growing your own parsley from seed, whether indoors or outdoors, will reward you with vigorous plants that can be cut just when you need a fresh bunch for your cooking – a much better solution than those frustrating supermarket pot herbs that barely last 2-3 weeks.

‘Giant of Italy’ is considered one of the very best flat-leaf parsley varieties, producing robust plants with sturdy upright stems bearing large, dark green leaves. Having a terrific sweet and pungent taste when used raw, it also retains its rich, strong flavour in cooked dishes – much better than its curly leafed cousin. The preferred choice of many professional cooks, this versatile, aromatic herb can be used in an endless variety of savoury dishes such as soups, stews and pasta, as well as added raw to salads and sandwiches; it also makes a tasty garnish that will rarely be left on the plate.

Highly nutritious, parsley is packed full of minerals, vitamins and antioxidants, being an excellent source of iron and vitamin C, as well as many other nutrients. Used as a medicinal herb for centuries, it is said to aid digestion, clear the skin and even to freshen the breath if chewed after eating strongly flavoured foods.

This tall-growing variety will continue to produce fresh new leaves many times after being cut. The best flavour is in the young leaves and regular harvesting will promote the new growth. Grown outside, it will also attract beneficial insects to your garden. Being a hardy biennial, it will set seed in its second year, although it is best grown as an annual, although if grown in a sheltered, well-drained position, plants can be protected over winter with mulch or cloches to produce new growth in the spring.

Supplied as a packet of 500 (approx.) seeds ready to sow indoors or outdoors.

How to grow Parsley