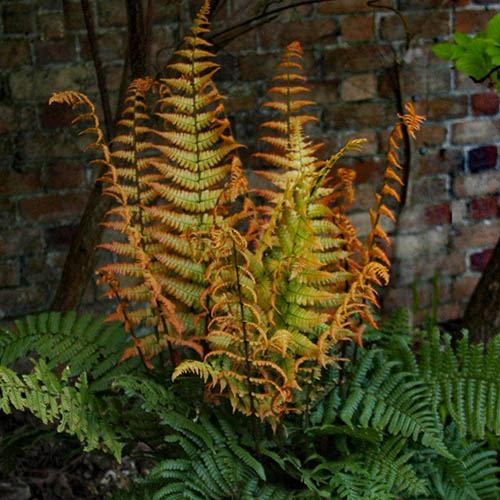 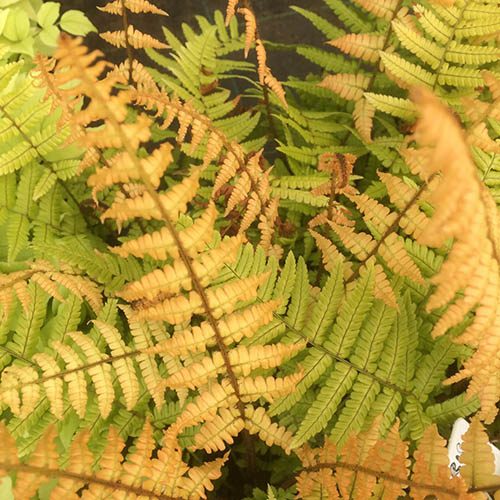 A fabulous new introduction, this colourful wood fern will not fail to delight as it unfurls its rose-tinted fronds in spring.
Read customer reviews

A beautiful variety of the popular Wallich’s Wood Fern, 'Jurassic Gold' is a fabulous new, British-bred fern that's sure to become a garden favourite with its rose-tinted new growth that turn gold and then green as it ages.

Winner of the 2019 Best Ornamental Plant Introduction at the Four Oaks Trade Show, Jurassic Gold was praised for its unusual ornamental leaves, which emerge bright golden orange with rosy tints.

Hardy ferns are a hidden gem of the gardening world and should be grown much more widely. Graceful and airy, Dryopteris wallichiana is totally winter-hardy and its rose-gold fronds will really stand out in your garden.

One of the best ferns to grow, Wallich’s Fern (also called the Alpine Wood Fern) will reward you with colourful, semi-evergreen fronds that look much like a shuttlecock, and is perfect in a small fernery, in the flower border or in a large pot, or even in mixed planters.

They prefer cool, fertile soil that doesn't dry out and are best in light shade where their colours really shine.

Grow with evergreen ferns and other woodland plants for a striking, designer-style effect that will really draw attention to your garden.

Item 560617 supplied as:
Supplied as an established plant in a 9cm pot ready for planting out, will reach approx. 60cm x 45cm